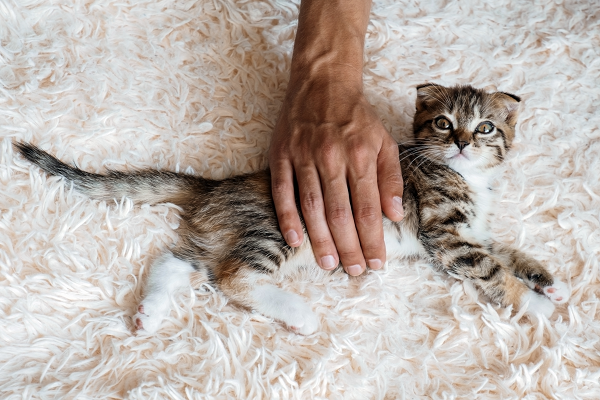 Roundworms are one of the most common intestinal parasites of the cat. They can be an important cause of illness, even death, in kittens. Almost all cats will become infected with roundworms at some point in their life, most often as kittens. As their name implies, these are large-bodied round worms, averaging three to six inches (8-15 cm) in length. They do not attach to the wall of the intestine, as some intestinal parasites do. Instead, they swim freely within the intestine. Roundworms are also known as ascarids and the disease they cause is called ascariasis.

What are the clinical signs of roundworm infection?

Roundworms are not particularly harmful to adult cats, but large numbers may cause life-threatening problems in kittens and debilitated older cats. In kittens, common clinical signs include a pot-bellied appearance, abdominal discomfort, depressed appetite, dull coat, vomiting, diarrhea, or poor growth. In both kittens and adult cats with small numbers of worms, there may be no clinical signs of infection. You may notice adult roundworms in your cat’s stool or vomit.

"Roundworms are not particularly harmful to adult cats, but large numbers may cause life-threatening problems in kittens and debilitated older cats." 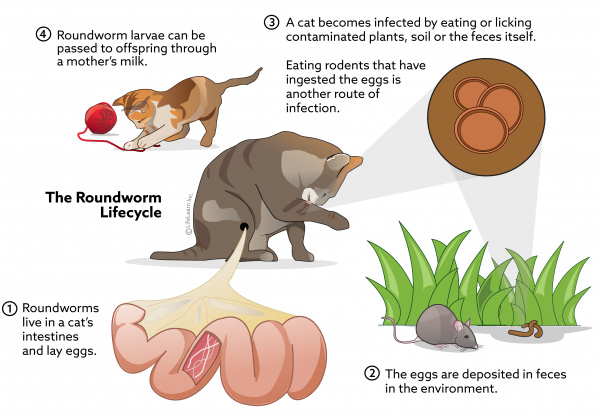 How do cats get roundworms?

Trans-mammary (milk-borne) infection is the major route of roundworm transmission in kittens. The roundworm larvae are present in the mother's mammary glands and pass to her kittens in her milk during nursing.

Both kittens and adult cats may become infected by swallowing eggs that contain infective roundworm larvae. These eggs may come from the feces of infected cats or from the tissues of an accidental host. In these hosts, the roundworm eggs do not mature into adults but are just transported. If a cat eats one of these intermediate hosts, the roundworm can complete its life cycle. Common accidental hosts for roundworms include earthworms, cockroaches, rodents, and birds. Once ingested, the eggs hatch in the cat's gastrointestinal tract, and larvae migrate through the muscles, liver, and lungs. After several weeks, the larvae return to the intestine to mature into adults. When the adult worms begin to reproduce, eggs will pass into the cat's stool, thus completing the life cycle of the parasite.

During migration, some roundworm larvae may become enclosed in a cyst while in a dormant state in the host's body. In female cats, the larvae can come out of the cyst during pregnancy. These larvae can then be passed to the kittens across the placenta during pregnancy, or through the milk after birth. 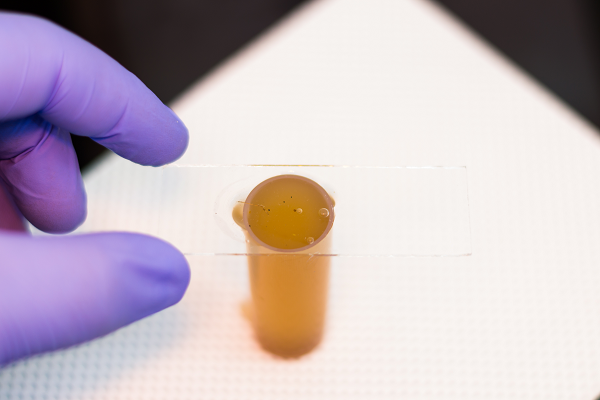 How is a roundworm infection diagnosed?

To diagnose roundworm infection, a small amount of the cat's stool is examined under a microscope (fecal flotation). The distinctive eggs are easily recognized under the microscope. Roundworm eggs are usually plentiful but, in some cases, it may take more than one fecal examination to find them. Occasionally, adult roundworms can be seen in the cat's stool or vomit.

"The distinctive eggs are easily recognized under the microscope."

What is the treatment for a roundworm infection?

Fortunately, the treatment for roundworms is safe, simple, and relatively inexpensive. The dead and dying roundworms pass into the stool after administration of deworming medication such as pyrantel (Nemex®, Strongid®) or fenbendazole (Panacur®). This treatment will not kill the immature forms of the worm or the migrating larvae, so at least two or three treatments are needed, typically done at two to three-week intervals. Ideally, kittens are dewormed at each booster vaccine appointment. Nursing females should be treated at the same time as their kittens. Most flea and heartworm preventives including Revolution® Plus, Advantage® Multi, and Milbemax® also kill roundworms.

What is the prognosis for a cat diagnosed with a roundworm infection?

The prognosis for a roundworm infection is good if appropriate medication is given promptly. However, in some instances, extremely debilitated kittens may die.

How can I prevent my cat from getting roundworms?

Prevention of roundworm infection should include the following measures:

• Breeding females should be dewormed prior to pregnancy and again in late pregnancy. This will reduce the risk of environmental contamination or transmission from the mother to her kittens.
• Kittens should be dewormed as recommended by your veterinarian. The first deworming should be given at two to three weeks of age. Note that this is prior to the time most kittens are seen for the first vaccines. It is entirely appropriate to present new kittens for an initial examination and deworming at two weeks of age.
• Adult cats remain at risk for re-infection with roundworms throughout their lives. Whenever roundworms are seen, the cat should be dewormed immediately. Cats at high risk for infection with roundworms should be routinely dewormed. Cats that like to hunt mice or have outdoor access should have a fecal examination several times a year.

• Many heartworm preventive products contain medications that will treat roundworm infections. This is the easiest and simplest method for preventing roundworms. Your veterinarian can advise you of the appropriate time to give these products, based on your specific geographical area.
• Control of insects and rodents is important since they may serve as sources of roundworm infection for cats.
• Litter boxes should be scooped daily. Litter boxes can be cleaned with a bleach solution (one cup of chlorine bleach in one gallon of water) to facilitate the removal of eggs. Rinse the litter box thoroughly to remove all bleach since it is toxic to cats. Surfaces that may be contaminated with roundworm eggs can also be treated with this bleach solution. This solution makes the eggs easier to rinse away but does not kill the eggs. Always wash your hands after handling litter box material.
• Appropriate disposal of cat and dog feces, especially from yards and playgrounds, is important. Roundworm eggs may remain viable in the environment for long periods unless they are exposed to direct sunlight or very dry conditions.

Are roundworms dangerous to people?

Roundworms can be a health risk for humans. The most common source of human infection is by ingesting eggs that have come from soil contaminated with cat or dog feces. As many as 10,000 cases of roundworm infection in humans have been reported in one year in the United States. Children are at an increased risk for health problems should they become infected. If the infectious eggs are swallowed by people, the larvae can invade the tissues and become encysted in various organs. Humans act like any other accidental host. If a young child ingests a large number of infected eggs, clinical disease may become apparent. Very rarely, liver problems may result from roundworm larval migration. Even less commonly, the larvae can migrate into the eye and cause blindness.

"As many as 10,000 cases of roundworm infection in humans have been reported in one year in the United States."

In suitable environments, the eggs may remain infectious to humans and cats for years. It is important to wash your hands thoroughly after playing with your pet or after being in areas where they may have defecated. Strict hygiene is especially important for children. Do not allow children to play in potentially contaminated environments. Be mindful of the risk that public parks and uncovered sandboxes pose. Even though feces may not be visible, roundworm eggs may be present.